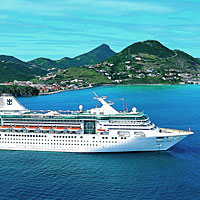 More delays and cancellations have been announced for Royal Caribbean’s Empress of the Seas, which was orginially scheduled to begin cruises from Miami on March 30th. Cruises scheduled for March 30, April 4, 7, 11, 16, and 21 were previously cancelled and now further delays in dry dock renovations have caused the cruise line to cancel cruises through May 23.

The Empress of the Seas, which is the oldest and smallest ship in Royal Caribbean’s active fleet,  is in the process of making the transition from sailing as part of the Spanish Pullmantur Cruises fleet. The ship is undergoing extensive renovations in dry dock. After the renovations are complete, the Empress of the Seas will sail four and five night cruises from Miami to the Bahamas and the Western Caribbean.

Royal Caribbean has stated that completely rebuilding rather than repairing the ship’s galleys (kitchens) is the cause of the delays.

Guests originally booked on the March 30, April 4, April 7, April 11, April 16 and April 21 sailings and rebooked on one of the newly cancelled sailings will receive a full refund and a future cruise credit of 100%.

Other passengers scheduled to sail on the April 25 or April 30 sailings who choose not to rebook will receive a full refund and a future cruise credit of 50 percent of the cruise fare paid. All other passengers scheduled to sail on the canceled May sailings will be given an onboard credit if they rebook to another Royal Caribbean sailing. All bookings not rebooked by April 30 will be refunded.

When you choose to cruise from Miami, you’re departing from the world’s busiest cruise port. Over 4 million passengers leave from Miami for the Caribbean and other destinations every year. All of the biggest cruise lines have trips leaving from Miami, including Norwegian, Carnival, Celebrity, Royal Caribbean and Crystal, as well as companies with smaller fleets and smaller ships, such as Azamara and Oceania.

Miami Cruise Guide provides you with the information you need about cruising from Miami, including info about ships sailing from Miami, cruise schedules, deals and special offers, and the best hotels to stay in before or after your cruise.