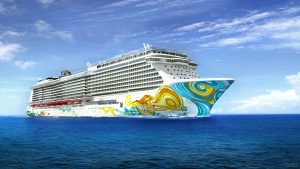 Norwegian Cruise Line, which is headquartered in Miami, is one of the world’s largest cruise operators. Norwegian’s ships are instantly recognizable by the large, colorful murals painted on their bows.

Norwegian offers an extensive line-up of cruises from Miami, with many ports of call throughout the Bahamas and the Caribbean, including stops at the cruise line’s own private island, Great Stirrup Cay.

One of Norwegian Cruise Line’s newest and biggest ships, the Escape provides passengers with tons of entertainment, activity, and dining options. The Norwegian Escape offers 7-night Caribbean cruises from Miami.

The Norwegian Getaway is a big ship with lots of options for passengers, including 28 restaurants and multiple entertainment venues, plus ropes courses, a climbing wall, and a zip line.

The Norwegian Bliss spends summers in Alaska and winters in Miami, sailing a regular schedule of 7-night cruises to the Caribbean.

The Norwegian Breakaway is a large, modern cruise ship with interesting features such as The Waterfront seaside promenade, a Thermal Spa Suite, and an activities deck that includes spectacular water slides and a challenging ropes course.

Norwegian Encore sails seven-night cruises to the Dominican Republic, Virgin Islands, and The Bahamas. Enjoy speedy fun? Encore has a top deck cart track, complete with curves suspended over the side of the ship!

When you choose to cruise from Miami, you’re departing from the world’s busiest cruise port. Over 4 million passengers leave from Miami for the Caribbean and other destinations every year. All of the biggest cruise lines have trips leaving from Miami, including Norwegian, Carnival, Celebrity, Royal Caribbean and Crystal, as well as companies with smaller fleets and smaller ships, such as Azamara and Oceania.

Miami Cruise Guide provides you with the information you need about cruising from Miami, including info about ships sailing from Miami, cruise schedules, deals and special offers, and the best hotels to stay in before or after your cruise.